Rolling out the Welcome Mat to Governor Kemp

LAFAYETTE, GA- September 23, 2019 The cooking team at Roper, led by Executive Director Lois Crandell, recently hosted Georgia Governor Brian Kemp as part of his Georgia Made tour. The focus of the tour is highlighting manufacturing and economic development projects across the state, including our recent $130 million investment in Walker, Murray and Jackson counties. The GEA investments announced in June include: 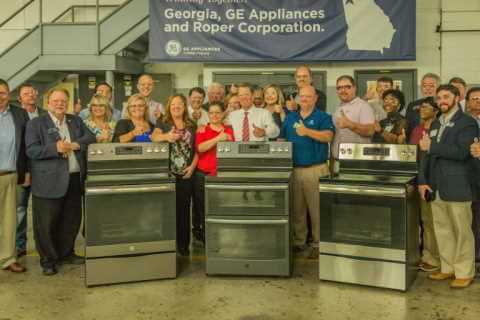 "We are 2,000 people strong, and we make more than one million cooking products a year," said Lois as she addressed more than 150 guests, government officials and the plant's leadership team in attendance. "We're a manufacturing team that believes in going beyond our walls and leading for the good of the community. We are assemblers, maintenance workers, engineers, support personnel, managers … all dedicated to making this one of the best places to work in Georgia."

As he addressed the crowd, Governor Kemp thanked GE Appliances for the company's continued investment in Georgia and long partnership at Roper Corp. "Thanks to corporate partners like GE Appliances, we are seeing greater investment and job growth in every part of our state," Kemp said. He reinforced his commitment to keeping Georgia a business-friendly state.

Following the governor's speech, the Roper team toured the governor and guests through the facility where he received a warm welcome from plant employees.